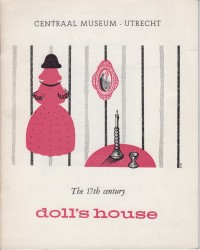 "The charming doll’s house in te Centraal Museum, Utrecht was built as a toy for grown-up people about 1674-1690: (...)"
Of the original doll inhabitants a few are missing, having been presented to important visitors in former times. The open front does not give a clear idea of the main entrace of such a house, usually placed in the centre of the facade, raised above the basement, and reached by means of a double flight of steps. Inner appartments and even the garden have been moved from the front, so that each part may be clearly seen."