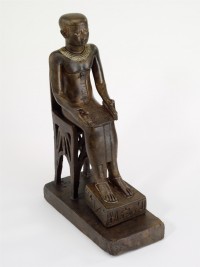 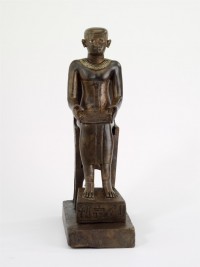 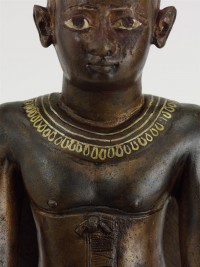 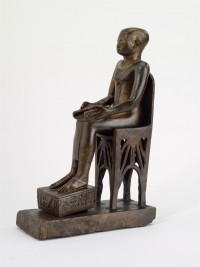 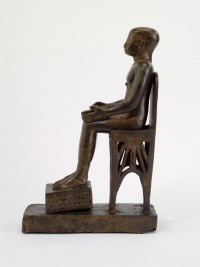 Imhotep lived during the Third Dynasty (c. 2686-2613 BC) of the Old Kingdom and was high priest of Heliopolis and architect of King Djoser’s Step Pyramid complex, which was built at Saqqara. In later times he was regarded as a man of wisdom and the author of admonitions. From the Twenty-Sixth Dynasty, the so-called Saite Period (664-525 BC), onward he was revered as a god with his own cult and temple. His worship was most widespread in the country during the Ptolemaic period (305-30 BC), when he was equated with Asklepios, the Greek god of medicine. Many votive statues were dedicated to Imhotep to ask for his help and intercession in sickness and infertility, and in rebirth in the afterlife.The Budapest Imhotep, a splendidly executed bronze with fine inlays of gold, electrum and silver, is an early and top-quality example of these votive statues, and according to the inscription written on its plinth, the statue was dedicated to Imhotep for the benefit of a man called Kham-Khonsu. Imhotep is represented seated on a chair with a papyrus scroll on his lap. The hieroglyphic inscription engraved on the papyrus asks for Imhotep’s intercession with the god Ta-tenen, the personification of the afterlife.The statue formed part of the Fejérváry-Pulszky collection as early as in 1842. By 1873 it came into the collection of György Ráth, whose widow presented the whole collection to the Hungarian state after Ráth’s death. Katalin Kóthay